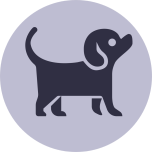 I grew up with non-pets.  A bird, a guinea pig, a hamster…I always wanted a real pet but never had one.  That all changed when I moved to Colorado almost 13 years ago.

One of the conditions of moving to Colorado with my fiancé was a dog.  We moved to Colorado in August, by September we were scouring the Thrifty Nickel looking for the perfect dog.  In October we met Nittany (a black lab/golden retriever mix) and I was in love.   Actually, I loved the idea of having a dog – Nittany and I had a bit of a rocky start and there were many tears and days I wanted to return her before I was in love with her as well as the idea of her.  But, once I fell in love it was over – I was officially a crazy dog person.  A couple years later we unsuccessfully fostered a puppy golden retriever and Paterno joined our family.  Last summer I lost my best friend Nittany to cancer and after sometime we started looking to grow our family again.  We once again unsuccessfully fostered a lab(ish) dog and Coaly joined our family.

Here are the links to the rescues that created our family