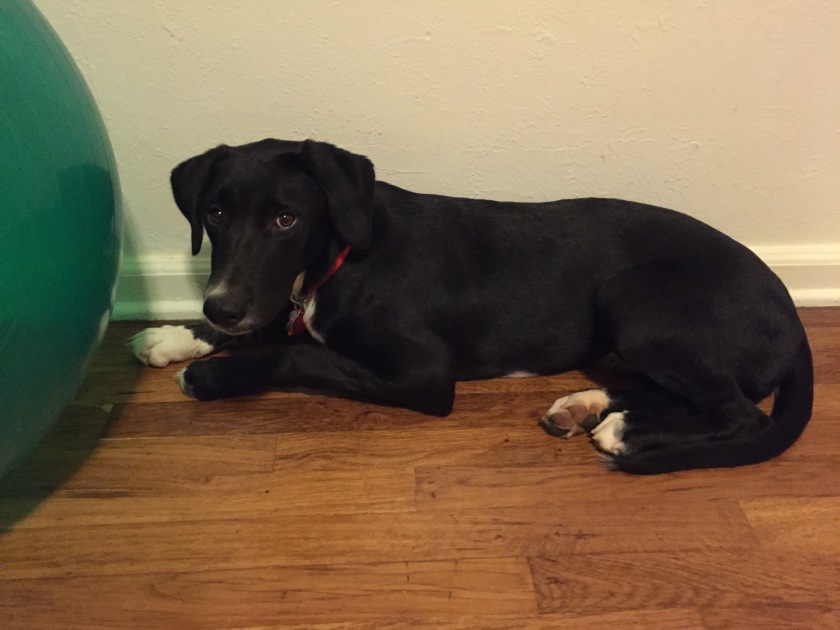 Today would have been Nittany’s 13 birthday.  Thanks to Facebook I woke up with a ton of memories of past birthdays.  Throughout this process I have realized the power of posting things on Facebook.  In the moment you are just sharing a quick memory or giving people a little view in to your life.  Years later when the memories pop back up it can transport you back to a different time in your life and it brings back a wave of memories and emotions.  After losing a pet they can be bitter sweet memories with lots of smiles and tears.  While it can hurt at times I do like starting each day with these memories.

The point of this post is not to spend more time grieving but rather give an update on what we’ve been up to lately.  After we lost Nittany we couldn’t even imagine getting another dog.  But, as the weeks passed the house was feeling empty without a second pup.  Paterno has adjusted to being only dog but we were afraid he might be a little lonely.  We didn’t want to jump in to getting another dog but we did start seriously talking about potentially fostering dogs for a rescue.  (We have fostered before and that is how we ended up with Paterno – so we totally know that fostering can be a slippery slope that could bring a second dog in to our family permanently but we are determined for that not to happen this time.)  We talked a little about what breed of dog we would want to foster and ended up deciding our experiences with Nittany were amazing and we wanted to help other labs and lab mixes find their forever homes so we applied to be a foster family for the Rocky Mountain Lab Rescue.  After a phone interview and a home visit we were approved!  I completely understand why they have to go through the process of the interview and home visit but the entire time I just kept thinking isn’t the fact we have kept two dogs alive for 10+ years enough of a track record?!  Yes, our lab had recently died but it was for something that was not our fault and we gave her the best life right up until the end.  Yes, our other dog has a neurological disease, but again, totally not our fault and we have been successfully treating his condition for almost two years.

So fast-forward from getting approved to agreeing to take our first foster dog.  We got an email last Sunday with the information about the dogs that would be coming in on the transport this week.  After all the anticipation of applying for and getting approved to foster I somehow had gotten cold feet.  I wasn’t sure if we were ready for another dog yet, even on a temporary basis.  So, I didn’t respond to the first request for fosters and hoped that other foster families would step-up and take the dogs that came in this week.  As the beginning of the week wore on the emails got more urgent the guilt set in and on Tuesday afternoon I finally pulled the trigger and said that we would be available to foster this week and selected a cute 4-6 month old black lab mix named Boogie.  Tuesday night I went to the store and bought some puppy supplies (it’s been a REALLY long time since we had a puppy in the house) and got ready for the pup’s arrival on Wednesday.

Wednesday night after work we headed east of the city to the drop-off, pick-up spot.  We had to drive to the DIA area at rush hour – it was a great way to start the evening.  Paterno came along because the pick-up time was at the exact same time he needed his medicine.  They told us that the transport van would meet us at the Petco parking lot at 6pm and we patiently waited for a passenger van to arrive with the pups.  At a couple minutes after 6pm a moving van pulled up and someone jumped out, ran around to the back and opened the door to reveal cage after cage of dogs that had been rescued.  There were probably 30 dogs on the van all coming from points east and going to all the different rescues in the Denver metro area.  There were huge dogs and tiny dogs coming down the ramp of the van and going to their respective foster families.  Some dogs were so excited to be off the van they bounded down the ramp and other dogs that were so scared and timid they had to be carried.  After what felt like forever they finally unloaded Boogie.  Boogie was so nervous coming off the van and tried to ran from every loud noise and sudden move.  From the beginning we knew Boogie had the potential of being a handful.  After we let Boogie get a little comfortable and used to being off the van we had to get him checked out by the amazing Rocky Mountain Lab Rescue volunteers.  The checked him over and gave him his microchip.  Boogie has some strange bumps on his ears and a scratch on his tummy that the volunteers requested we get checked out by a vet.  After the initial excitement we introduced Boogie to Paterno (who became fast friends) and headed to the car for the ride back home.

During the car ride Boogie was a complete angel.  He just stared out the window at the passing scenery and seemed to be a little more comfortable.  When we arrived home his nerves returned and he was very nervous about everything in the house (except Paterno). Because he didn’t really seem comfortable insider he spent some of this first evening in the backyard chasing moths.  He seemed to feel more comfortable outside and we wanted him to be as comfortable as possible.  After it was too dark to see a black dog in the backyard (and we didn’t want to be the people who lose their first foster dog) we came inside and got Boogie settled in to his crate.  Boogie really seems to like his crate and chooses to go there whenever he gets nervous or afraid so we just made his crate available to him and let him settle in for the night.

While we successfully made it through day one of fostering we knew there was a lot more to come…Continue to check in for your adventures in adopting.

With a lot of rescue dogs they don’t come with any history so you don’t really know where they came from or what their lives were before they got to Colorado.  There are so many things that could have happened to Boogie to make him so fearful and timid.  It was our job to make him as comfortable as possible until he can find his forever home.