When I first started running my only concern when racing was to finish the race.  The time didn’t matter – the only thing that mattered was the medics didn’t have to come and scrape my crumpled body off the pavement.  As my running got stronger I started to push myself at races with the only goal being to beat my time from the race before and I was doing that pretty consistently but then I got the bug to get my 5k under 30 minutes.   I had been getting really close to the 30 minute mark but hadn’t been able to slip under it, that was until the beginning of August.

In early August I ran the Evergreen Town Race 5k in beautiful Evergreen, Colorado.  I had run the race last year and finished in just over 30 minutes so I knew my goal was obtainable but I just needed to focus a little harder.  This race course is awesome because the majority of it is downhill.  It’s not a steep downhill but a nice easy downhill slope so it’s naturally a faster race.

I have become really fond of this particular race because it’s always the weekend before my birthday and a way for me to celebrate making it through another year and still being able to run.  Okay, so I may be a little dramatic but damn being in your mid 30s isn’t all kittens and puppy dogs – suddenly you have aches you didn’t have before and you start feeling the need to tell people about your new pains.

Despite the crowd and the need for the walkers to get right up front at the start line I felt like I was off to a really strong start.  I was slightly frustrated by the number of children running the race who would be right in the middle of the trail and run for a couple hundred yards and then stop suddenly making the runners around them have to zig and zag as to not take one out or trip over them.  Yes, I understand they are children but obviously their keepers (I mean parents) are runners so why haven’t they taught them race etiquette?!  I had been training with a 2:30/0:30 interval and was planning on following this during the race but when my iPhone indicated it was time to walk for the first time I felt strong enough to skip the walking and just run.  I was so excited when I came around the corner to the finish line and saw the beautiful clock showing 29 minutes….finally I had joined the sub 30 club!!  My final time was 29:14 and I don’t think I have been that excited in a really long time.  After the race I found my husband and was telling him all about my time and he showed fake excitement but I know he didn’t really get how big of an accomplishment this was for me.  But, then again I probably don’t show the proper amount of enthusiasm when he comes home from a good skiing trip or climbing a hard mountain…to each their own. 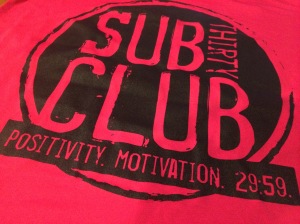 Since the race I have gotten a little lazy with my running.  Hot summer months tend to suck out my motivation but I have been out for a couple runs and spent some quality time with the treadmill and can honestly say that I am feeling stronger and stronger every time I run.  For so long I felt like I was on a running plateau.  I wasn’t getting faster or stronger just staying exactly the same.  Each run was just a mirror image of the last and it was getting really frustrating.  Joining the sub 30 club has definitely given me a new lease on running and has motivated me to run longer, stronger and faster.